How Automation Is Changing the Way Restaurants Do Business 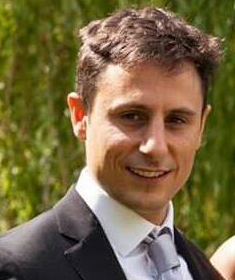 These days, automation is the talk of the town – and the food industry is no exception. Research and Markets predicts that the global food automation market is poised to reach $14 billion by 2025.

With each passing day, companies are developing, improving, and perfecting impressive technology to automate daily processes. This in turn brings promises of lower operational costs, more efficient customer service, and an overall boost in productivity.

But a lot of this technology is still in early stages of acceptance, and there’s a lot of growth and specialization that needs to happen before the robots can take over food service as we know it.

Let’s discuss the state of automation in the restaurant industry, as well as some benefits and challenges presented by it.

How Restaurant Automation Is Impacting Food and Restaurants

At its core, restaurant automation makes things more efficient – when done right, it can simultaneously decrease a restaurant’s costs while increasing efficiency. And while some of this tech comes with a hefty price tag, new developments and improvements to old ones are making these systems more accessible and affordable.

That’s why we can expect that more restaurants will continue to jump on the automation train as the industry continues to mature and specialize.

The Highs and Lows of Labor and Robots 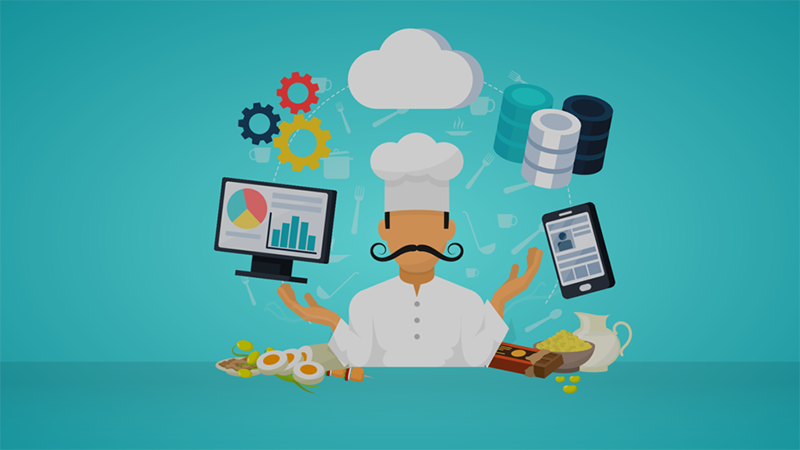 There are numerous perks for restaurants that can find the right balance of human labor and automation.

Leading provider Ziosk states that automation can expedite the dining process by roughly six to nine minutes, as customers don’t need to wait on servers to take their orders or fulfill other requests. Faster experiences naturally translate into more customers per day, which means higher revenue for restaurants.

As a bonus, this more efficient experience can also encourage higher tickets: another provider, Buzztime, claims that its self-service POS system boosts customer checks by an average of 21 percent.

When you couple increased efficiency and revenue with fewer wages paid to personnel and less error caused by those workers, you have a clear recipe for a sustainable, lucrative business model.

However, this key benefit doubles as one of the biggest controversies. Around the world, workers are worried that they’ll be replaced by robots, with their skills made obsolete.

One story reports that up to one-quarter of U.S. jobs could be replaced by 2030. Going further, this impact on the workforce creates anticipation around its potential impact on local and global economies.

While there’s no way to predict the outcome, it’s certain that the workforce will evolve in response to this new tech.

Next, take a look at two examples of robotic restaurants that are paving the way for others.

Spyce and Zume have paved the way for revolutionary business models that embrace automation. Let’s explore these restaurants and their approach.

Founded by four robotics engineers from MIT, Boston-based Spyce is the world’s first restaurant of its kind. It features a robotic kitchen that cooks each meal fresh to order in three minutes or less.

“Our woks cook by constantly tumbling your food, which provides a really nice and even sear,” says Co-Founder and Lead Mechanical Engineer Luke Schlueter. “They're heated with induction and we have temperature control to perfectly cook your meal every time.” 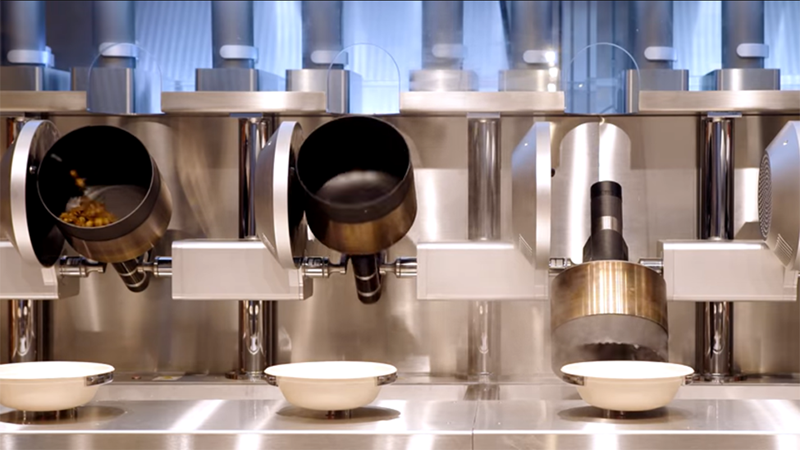 Daniel Boulud, Culinary Director and Michelin-star chef, discusses his first introduction to the concept, saying that a robotic kitchen was something that left him puzzled. He needed to come to Boston.

Skeptical at first, Boulud was soon won over by the concept, he discovered that the robotic kitchen brings precision, consistency, taste, and freshness to the preparation.

Based in California’s Bay Area, Zume Pizza combines human labor and robotics for a new take on a pizza shop. Robots handle repetitive tasks like rolling out dough, adding and spreading sauce, and carrying each pizza into and out of the oven.

It’s all done in a fraction of the time it would take human staff, allowing the company’s headquarters to pump out up to 370 pizzas an hour. 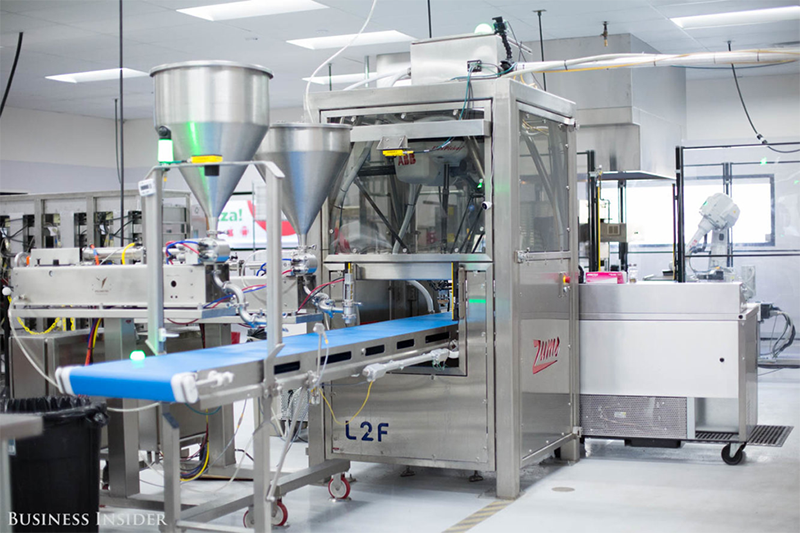 Zume has recently added a fleet of special delivery trucks, featuring smart ovens that cook pizzas on the way to their destinations.

Alex Garden, CEO and Chairman of Zume, believes that robots are here to improve life for their human counterparts. “We believe that automation exists to improve human lives – first with our employees, then our community and customers,” he says.

So, for every unit of robotics or automation Zume introduces into its kitchen, they first ask themselves how will this addition improve people’s lives? Does it make the environment safer and more fulfilling for their personal? Does it improve the quality of service being provided to their customers?

In November 2018, the company snagged $375 million in investment to grow the enterprise and expand its food tech to more businesses.

What Are the Benefits of Restaurant Automation?

Let’s go over some of the key benefits of restaurant automation for the front-of-house and back-of-house.

Ordering kiosks. Kiosks are quickly becoming a standard in the fast food industry. Major chains like McDonald’s, Wendy's, and Panera Bread are already testing the waters in some of their locations.

These kiosks allow customers to stroll up, tap their orders in, and complete payment without any assistance from human employees. Results have been promising so far, suggesting that these will soon become more widely adopted by smaller restaurants, too. 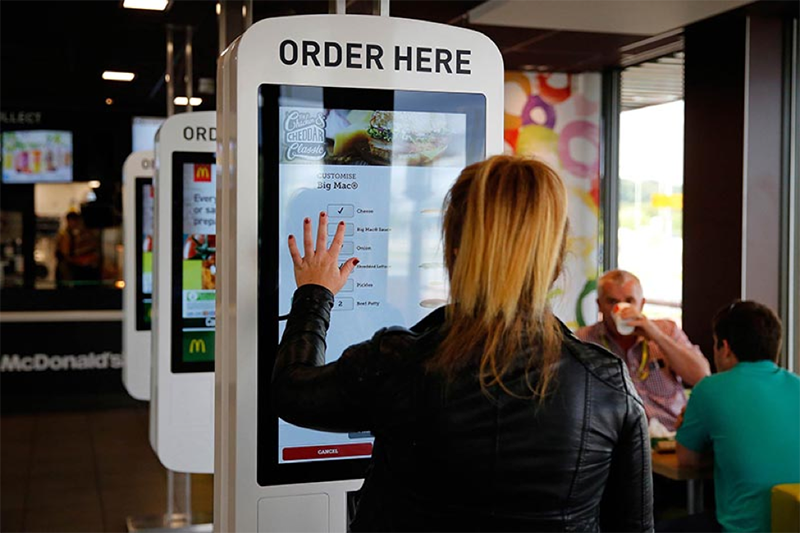 Reservations. Restaurant reservations are ripe for disruption from automation - in fact it has already been happening over the past 10 years. Hosts can spend hours per day on the phone taking and confirming reservations. At busy restaurants this can require 2 or 3 full time staff just to manage bookings.

Reservation automation systems, like Eat App, can help restaurants automate the reservation process through online booking systems. In these systems guests can see real-time table availability on the restaurant website and place confirmed directly. These systems can also seat guests automatically and optimize table allocations without the host stand lifting a finger.

Reservation automation is one of the easiest, and cheapest, ways restaurants can get started with automation. Learn more with the video below.

Capacity management. Anyone who’s worked in food service can attest to how stressful it can be when a restaurant meets or exceeds capacity. Employees are stressed, capabilities are stretched, and customers are impatient or possibly unhappy.

A smart system can help ensure this doesn’t happen by keeping track of capacity in real-time. When things get tight, the system can take several elements into consideration to make important judgment calls. This can in turn create smoother experiences for restaurants and their customers during peak hours.

Using a restaurant management software can help manage capacity issues for your restaurant by helping you derive a floor plan and understanding thoroughly about the available capacity at any given time in order to avoid overbooking or underbooking.

Cooking process. As we saw in the examples of Spyce and Zuma above, robots do an excellent job when it comes to repetitive and dangerous tasks like food prep and activities that involve contact with direct heat.

This can help to expedite cooking, while consistently creating predictable results and helping to foster safer working conditions throughout the entire cooking process.

Robots can help with both of these challenges. Smart tech can use analytics and prediction to measure food use and place intelligent ingredient orders, while automated measuring can ensure that portions are right where they need to be.

For instance, Dominos Pizza is testing a high-tech, autonomous robot, DRU developed by Starship Technologies programmed with inbuilt cameras & GPS systems that carries about 4-5 medium pizzas and delivers them independently to the customers via a code delivered to their phone while can be used to unlock the cargo area to access the pizzas.

Though technology like DRU is currently still in testing phases, it indicates the upcoming wave of change in the way restaurants deliver food driven by automation and technological advancements.

What Are the Downsides of Automation?

While automation can help solve a lot of common foodservice challenges, it’s no silver bullet. Here are a few issues that prove that the robot takeover isn’t as close as some may think.

High implementation costs. Cost is a huge barrier to entry for restaurants. Smart and responsive machines can be incredibly expensive to obtain and tweak to ensure they cater to the nuances of your restaurant.

With that said, the tech has the ability to quickly earn back the investment – but only for the companies that can afford the time in between.

Inability to make complex judgment calls. Apart from costs, another big issue is that robots simply can’t replace the complex functionality of the human brain. (And the ones that come close are still way too expensive to make sense to businesses.)

For example, unless they’ve been specially developed to do so, robots can’t tell if an ingredient is going bad or a meal has burned. If a customer requests a certain change to a dish, a robot can’t fulfill the request unless it’s been programmed.

Lack of human connection. Human connections are one of the pillars of a customer’s restaurant experience. From being greeted with a smile to having their needs consistently accommodated, a strong emotional connection can turn a mediocre dining experience into an amazing one.

While robots can certainly make the process faster and less prone to human error, it simply can’t replace the connections that happen every day when people come together over a good meal.

People vs. Robots: should the human workforce be worried?

The most critical question that arises with the spurring growth of automation in the restaurant industry is - are these high-tech robots going to replace the human workforce in the kitchen and tarnish the source of income for thousands of workers? It's an obvious question, however, it currently has no answer.

Right now, automation is just "lending a hand" in the restaurant industry, with robotic equipment assisting people in repetitive and easy-to-do tasks like flipping burgers and pumping out espresso shots, unable to perform the whole task independently.

Most industry experts, like Patrick Maguire from Servant Not Servant, believe that the idea of automation from the standpoint of economic & operational efficiency may be relevant, however, machines can never match up to the personal touch and intangible service skills that humans bring to the dining experience. 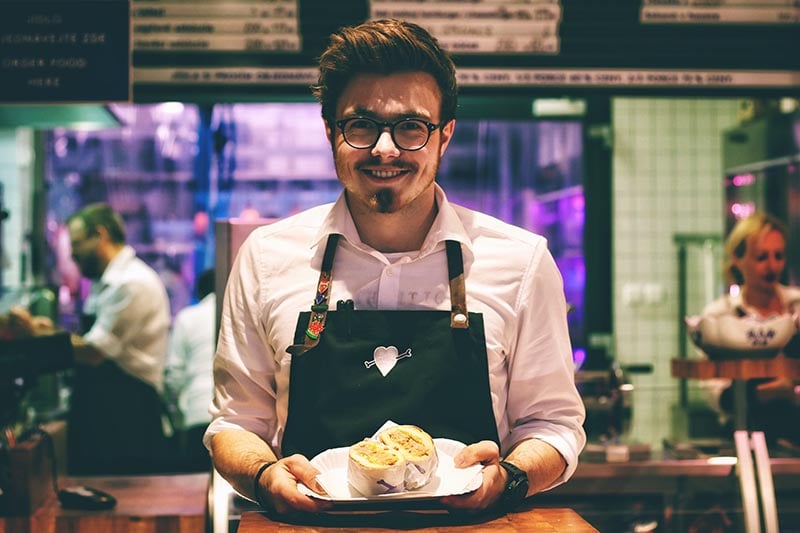 However, a few decades ago, even the idea of having robot-prepared pizzas would have seemed bizarre, and yet, today it stands as reality. Whether automation will ever completely overtake the restaurant industry, that's a story only time can tell.

There’s no way around it: automation in the restaurant industry is gaining speed quickly, and it’s here to stay. This approach is one of many technologies and strategies that businesses are using to keep up with high operational costs and increasing competition.

Companies that are pioneering this technology are exploring how to balance the pros and cons of integrating it into their business model – finding just the right mix of rapid, repeatable automation and the high-level decision-making skills and human touch that robots simply can’t replace. 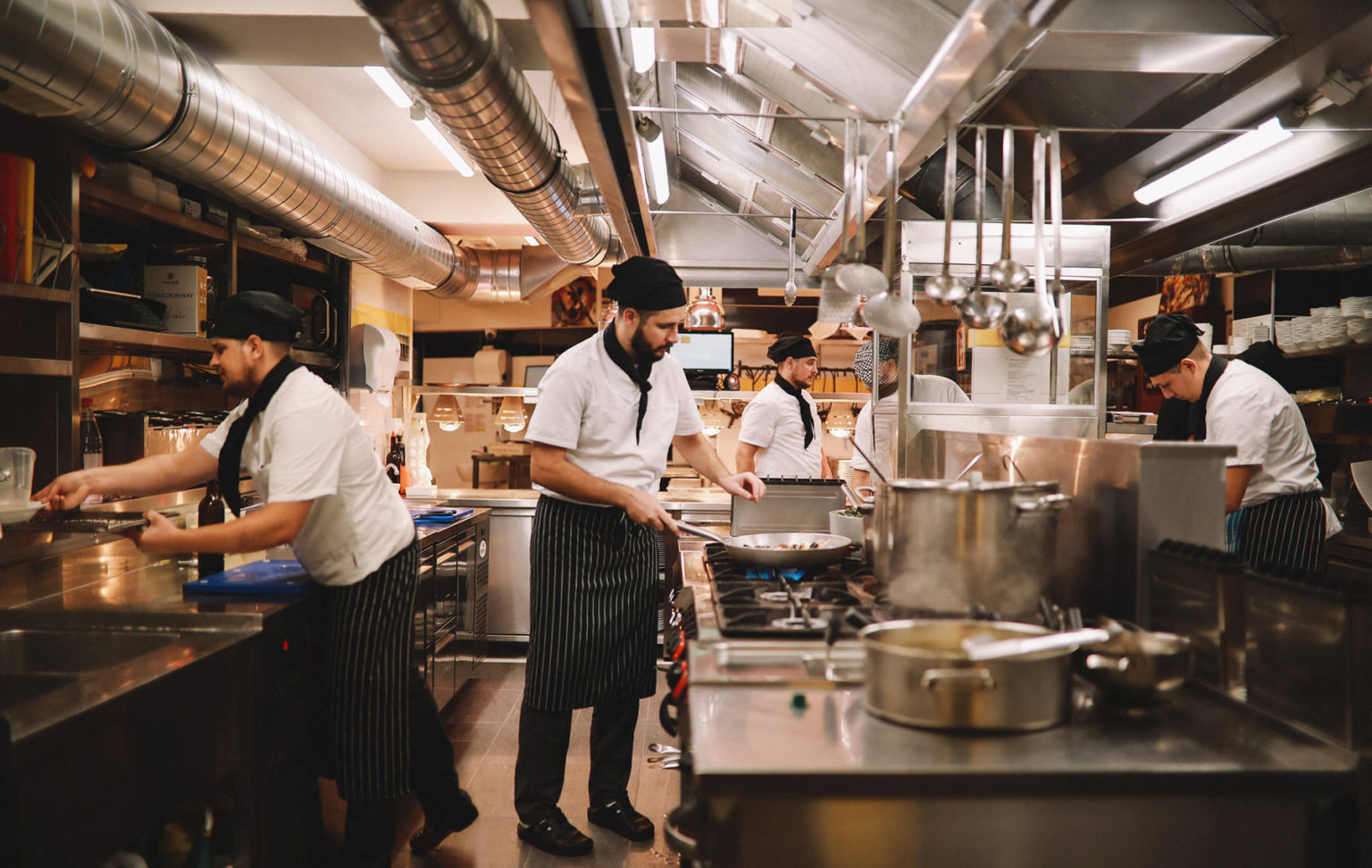 How To Create A Restaurant Employee Evaluation Form (Free Template) 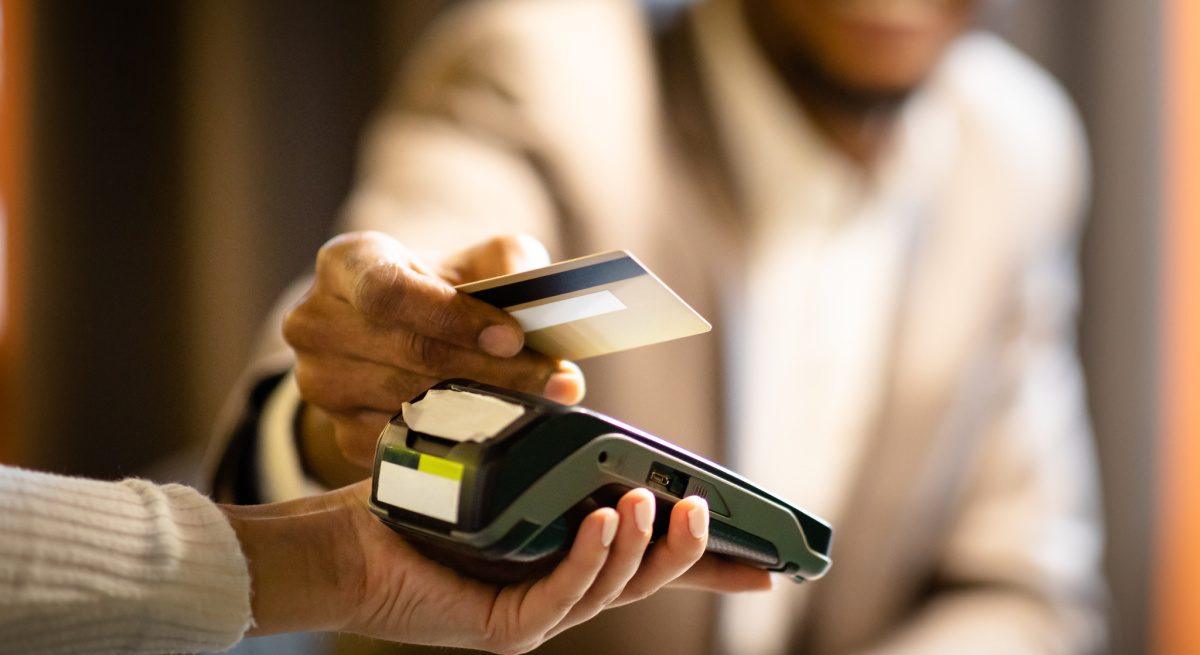 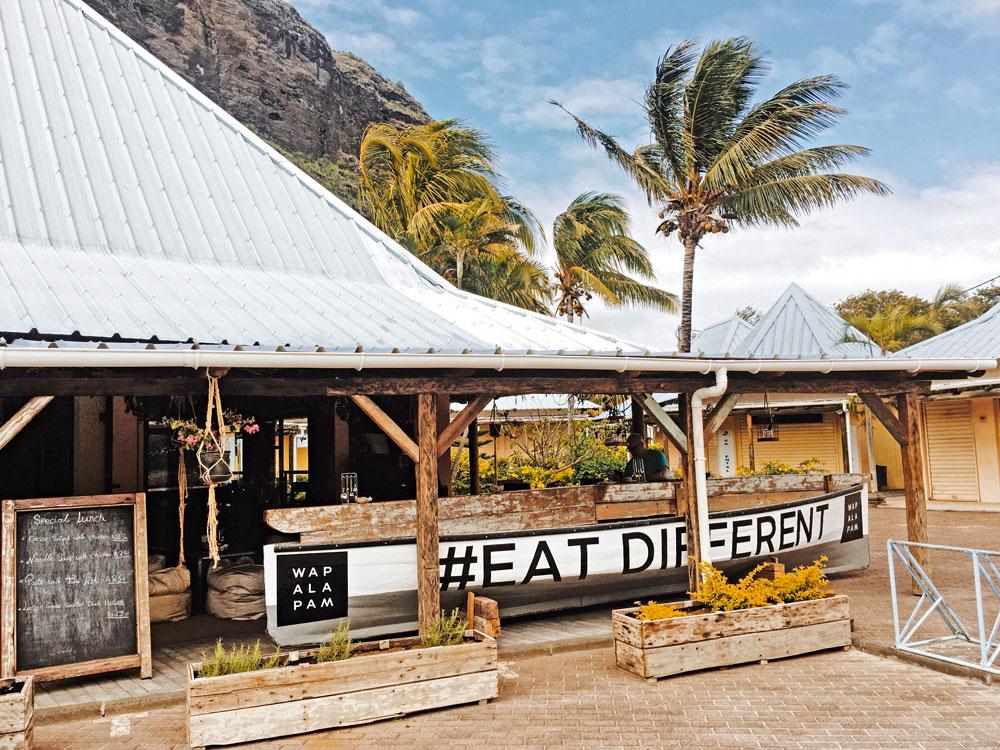 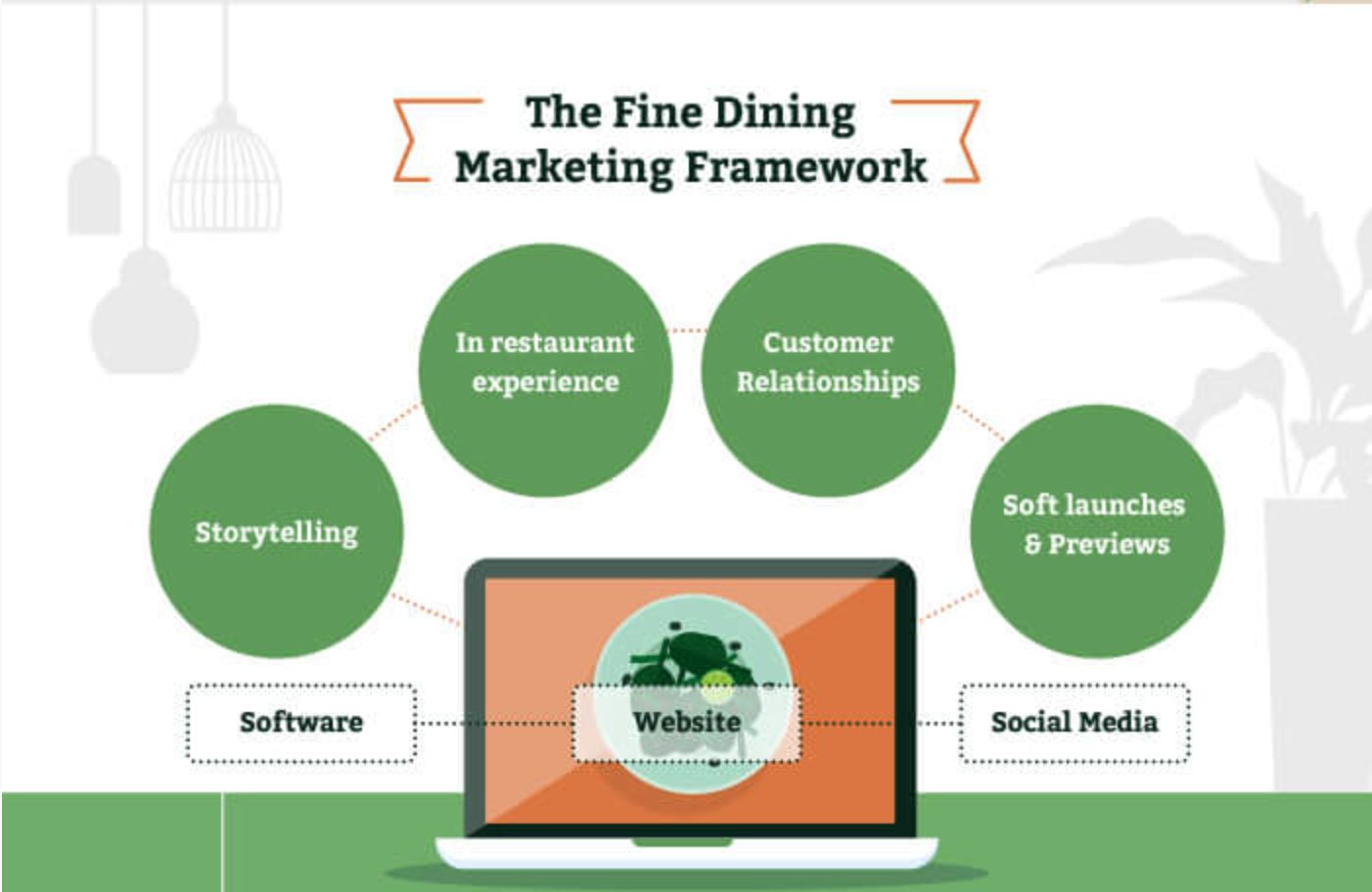